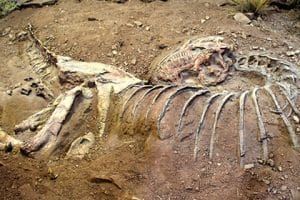 Dinosaur Dreaming – MONASH UNIVERSITY Dinosaur/VP PALEO SITE. The Australian university has an on-line paleo site where you can learn about its ‘Dinosaur Dreaming’ expeditions. Dinosaur Dreaming is part of a successful project between Museum Victoria and Monash University, the Dinosaur Dreaming fossil excavations at Inverloch over the last 12 years have yielded not only fascinating insights to the life and times of Australia’s Dinosaurs, but also highly significant and intriguing fossil mammals. Inverloch: Home of Dinosaur Dreaming is the Victorian coastal town near which the Dinosaur Dreaming site is located. About 145 kilometres (ninety minutes drive) from Melbourne, Inverloch is a very civilised place from which to do field research.The site is a rocky shore platform called Flat Rocks, about five minutes’ drive from the township on a stretch of coast favoured by surfers and fishing enthusiasts. This is where the Cretaceous mammal, Ausktribosphenos nyktos, was found in March 1997… READ MORE

Dig It! The world renowned Jurassic Morrison Formation covers more than 350 square miles from Canada to New Mexico and contains every conceivable environment from dry deserts to swamps. Join Paleontologist and Education Specialist Peter Laraba on this two-day e-field trip as he takes an expedition to Colorado and Utah to explore the Morrison Formation by sampling two of its many environments. On September 28th, they explored a working dinosaur quarry in Grand Junction, Colorado, joining scientists and volunteers in the discovery and excavation process. We got into the “trenches”, working with Utah State paleontologist Dr. James Kirkland, the discoverer of the first Utahraptor skeleton, to uncover the secrets of a Jurassic watering hole. On September 29th, they went to the world famous Dinosaur National Monument. Although still in the Morrison Formation, the environment of deposition along the banks of a large river system is very different from the watering hole of the previous day. National Park paleontologist Dan Chute will be your guide through the rich history of the area and reveal some of the treasures yet to be discovered in this unique park. NOTE: The Technology Required – QuickTime 4.0. An internet browser, version 4.0 or higher. Recommend a 56K Internet connection or greater. Originally webcast September 28 & 29, 1999 live on ALI QuickTime TV. Watch this archived version any time! Intended for grades K – 9… READ MORE

Dinosaur Digs – Field Experience that you can join

If you do, you have a chance to participate in a real dinosaur dig. You can find information how you can join a dig, such as excavating a stegosaur bone bed with 4 or more individuals represented. Stegosaurs are very rare, usually found as only one single individual.

Brought to you by SN Science Toys and Equipment.