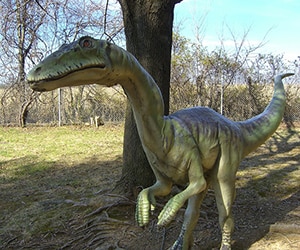 Eucoelophysis was a ceratosaur distinguished from other ceratosaurs by characteristics of the pubis and femur . It was originally discovered in 1993 and known as the Orphan Mesa theropod. It was much smaller and delicate than either Ceratosaurus or Dilophosaurus, and more closely resembled Coleophysis and Syntarsus. The lack of a skull makes it difficult to characterise beyond Ceratosauria.