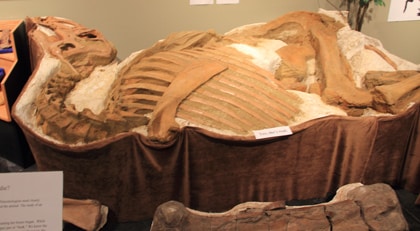 Meet Leonardo, a 77-million-year-old sub-adult Brachylophosaurus canadensis. His fossilized skeleton is covered in soft tissue–skin, scales, muscle, foot pads–and even his last meal is in his stomach. The actual tissue has fossilized, but Leonardo presents the world with its first look at a dinosaur in the flesh.

“This unique discovery will completely change what we know about all dinosaurs and the world in which they lived” says Nate Murphy, world renowned dinosaur paleontologist and Leonardo principal investigator. “In short, Leonardo is as close to Jurassic Park as we’re ever going to get.”

“We have to really invent new science just to study this specimen. You can’t just scrape the dirt off the bones, because that dirt is the soft tissue. I can’t wait to see what we discover when we look at this with new technologies.” – Dr. James Kirkland

Leonardo is, quite simply, the “King Tut” of dinosaurs. What we learn from him could completely change everything that we know about dinosaurs. This specimen possesses many features that will provide scientists with a clearer picture of what dinosaurs looked like. Some of these features include the following: 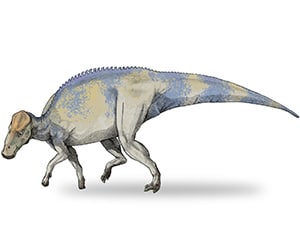 It isn’t often that an opportunity to influence millions of children in a healthy direction presents itself to the corporate community. Through Leonardo, and dinosaurs in general, we have such an opportunity to conceptually recreate an extinct species (like the Thylacine).

The mere mention of the word dinosaur inspires an unmatched sense of awe and wonder in both adults and kids alike. Simply put, the world is fascinated by these massive prehistoric beasts. We intend to use this fascination as way to help stimulate interest in science education that will, in many children, grow into a burning desire to learn and explore.